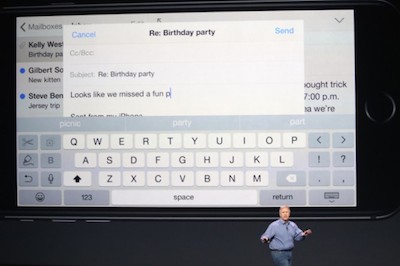 With Apple’s announcements yesterday, it just got a lot more expensive to develop for Apple’s ecosystem.

I’ve written before about why it’s important to test your code on as many different devices as you can before you ship. That’s been getting harder and harder over time, but it just got a whole lot worse. Up until now, Apple pretty much only released one new iPhone a year. Yes, they released two last year, but the 5C wasn’t all that different from the 5 for programming purposes, so many of the devs I know skipped it. We couldn’t safely skip the 5S (at least in my opinion), since the processor changed from 32bit->64 bit. That meant that the code that ran on the 5S behaved differently than the ones on the 5/5C, and so (again, in my opinion), we really needed to test both.

The year before that, we really needed to buy an iPhone 5 (or the corresponding iPod Touch) since the screen size changed, and that affected how apps behaved enormously. Prior to that, I got away with getting a new iPhone only every other year.

This year, though, there are two new iPhones, both with completely new screen sizes (and one with a completely different keyboard). We need to test on both of those.

Early on, Apple used to release new iPod touches that were cheaper versions of the iPhones, and we could use them for development, but they haven’t done that in quite a while.

So the price of keeping up with the Apple ecosystem has just gone up, and that doesn’t even consider the WATCH or any new iPads that get released later this year. That’s not a big problem for large corporations, but it’s real money for the little guys.

I don’t blame Apple for this – they’re just going where the market is leading them. But it’s getting harder to be an indie all the time.