Although I do iOS Contracting to pay my bills (at least to date), I hope one day to earn a living from my own apps, and, although it’s not ready for release, the time has come to unveil my new project. 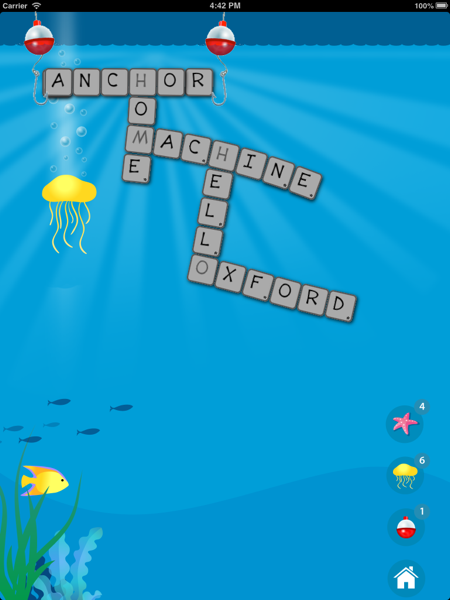 Million Words is a turn-based crossword game where you’re scored not by what letters you managed to get into your word, but by the grade level of your word, relative to your age. This way my six-year-old daughter could play “HELLO” and I could play “HELICOPTER” and we would get the same number of points (more or less).

When I got my retina iPad, my iPad 2 became my wife’s iPad, and my first generation iPad got freed up for my six-year-old (when I’m not using it to test how my code runs on old hardware). I erased the data and gave it to her so she could set it up as “hers”. Being six, she uses it primarily to play games, and I was frustrated to notice that those games fell into two categories:

*Educational Games, whose content she would exhaust in short order and lose interest in, and

*Fun, Endless games that she could play over and over, but that had limited educational value (think PopCap).So I started trying to think of what kind of game would keep her interest and teach her something, and thought that, like the console First Person Shooters, a multiplayer game might keep her interested, and I thought it would be fun to play a turn-based game with my daughter while I’m stuck at work. But I couldn’t find one, so I decided I’d make one.

So a turn-based crossword game seemed a natural fit (remember, I want it to be educational, and spelling is a place she (and I think most kids in the SMS-generation) could use some practice). But the existing ones don’t work well for younger kids. First of all, they get crushed by the bigger words that parents can spell. Secondly, they get frustrated when they have a pile of letters that don’t spell a word (and don’t we all).

I licensed educational word lists from an American University for the content (American English only so far, but I might do UK/Australia as well if I can find a source). This also has the benefit of excluding those stupid 2-letter and 3-letter so-called “words” that people memorize just to play in word games and never use in conversation or composition.

So I decided the game would give you an adjusted score based on the grade-level of the word and your age. And I decided that (at least for kids) the game would make sure that there was at least one word at your level that could be spelled with the letters you were given (which can be done in a computer game, but not with letter tiles in a bag). That also makes it possible to make a “hint” system, so it can keep them from getting stuck (and maybe even teach them new words). 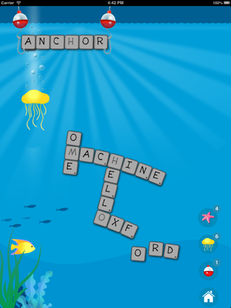 Of course, that creates a problem that I can’t end the game when the “bag of letters” is empty - because there isn’t one. So I came up with a different way: I’m hooking the letters to a Physics Engine and letting gravity end the game.

There are two cool things about this (aside from the visuals): First, if you intentionally play words that connect other words (which is an additional level of difficulty), then you can keep the board “stable” and play longer. Second, it enables an interesting “Solitaire” variant, where you are playing by yourself, just trying to see how large a board you can construct before it crashes. And, just maybe, it’s an interesting enough aspect that adults might like to play against each other, as well. 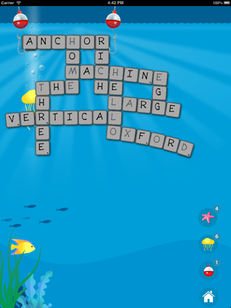 And there are lots of other things I have on the drawing board: letting parents put their children’s current spelling lists in the game, using the iOS5 dictionary to make “suggestions” when words are misspelled and to show the definitions of words.

And the most interesting possibility, I got from the name. My six-year-old told me I should call it “A Million Words” because it sounded cool to her. I told her the game didn’t have that many words in it, but she insisted. And, honestly, I haven’t thought of a name I like better (and I’ve tried, believe me). So I decided to take the other perspective and try to figure out what I could do to make the game fit the name. And what I decided was that I was going to track, on the website, the total number of words spelled by all the players of the game, and have a countdown to when A Million Words had been spelled, aggregate, in-game. And once that milestone was reached (as it hopefully will be), then the countdown would start being broken down by demographics: which age group would reach a Million Words spelled first: the kids or the adults? I think if I do that right, it could be an interesting marketing opportunity. 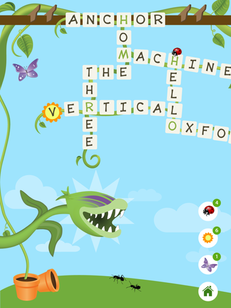 So, obviously, I’m not done, yet. I hope to be done by the holidays this year, but we’ll see what happens. I still have a lot to do:

I’m writing a crossword game where people of different educational levels can compete on a level playing field (so to speak). I’m hoping it will be done late this year, and I’m trying to validate that it’s the kind of game people might want to play. I hope that, if you’re interested, you’ll Sign up for the mailing list.