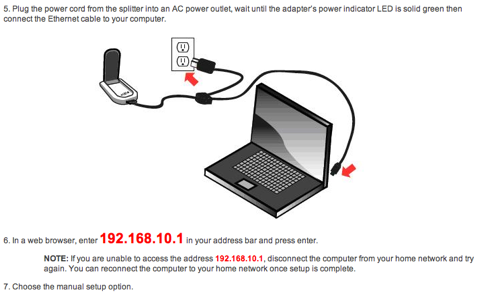 TiVo has completely lost their way.

I love TiVo. Or have. I got my first one in 1999. It has started having issues (locks up every couple of days and has to be power cycled). That sucks, but the thing is 11 years old. So, for my wife’s birthday last month, I bought my wife a new TiVo Premiere XL.

I thought it would be a good idea. Wow, I was wrong.

The illustration above is exemplary. I paid extra for the TiVo-branded WiFi adapter because I figured it would have the best chance of being able to deal with it if something went wrong when I was out of the house. I’ve talked her through reconnecting our XBox 360 to the wireless network before, and that wasn’t fun.

There are two ways to set up your TiVo WiFi adapter. Have a wireless network with a WPS compatible access point (which we don’t have, because nothing else in our house would be able to use it), or a 13 step process that includes the steps:

*connect the Ethernet cable to your computer

*disconnect the computer from your home network

*Disconnect the adapter’s Ethernet cable from your computer and plug it into the back of your TiVo DVR.What the Hell?!?

But even once that’s set up, it’s still a complete piece of crap.

First of all, there is no option for interoperating with a cable box. None. No IR out. So you are forced to get a CableCard and likely a Tuner Adapter form your cable or satellite provider.

Good luck with that. It took us almost 3 weeks.

In the mean time, I had hooked up an antenna so we could get a few channels. Once we finally got the cablecard working, I wanted to remove it. It took me An Hour and Fifteen Minutes for the TiVo to let me tell it to delete the antenna, a process that required me to “repeat guided setup” which forced the TiVo to re-download all the channel guide data for the cable line up that hadn’t changed.

And then, the worst part. The interface is virtually unusable. The fastest I have EVER had this TiVo respond to a button press on the remote is 2 seconds. Hitting 3 or 4 keys in succession, the lag has hit 11 seconds.

Looking at the TiVo forums, there is a consistent suggestion that you can speed up the menus by disabling the “HD Menus” and going with the SD-only menus. Funny thing is - I’m already using the SD-only menus. The HD menus are way slower even than what I’m describing here.

This thing is easily 80% slower than the eleven year old Series 1 I’m replacing. And that’s with the extra HD UI turned off.

Or, at least, that I planned on replacing. I still have 2 weeks of my 30 day money back guarantee left to make up my mind. At this point, I don’t think the TiVo has much of a chance.